In this article we will explore 9 Best Free Games for Android and iOS 2020 latest and good rating Gaming Apps most of the games we select require less storage and you can enjoy it on your old phones too and few games require better specs devices to play so let’s start. Game of Thrones Beyond the Wall

It is selected in 9 Best Free Games for Android and iOS 2020. This game is inspired by the original Game of Thrones story “Command the Night’s watch” you can play with three characters John Snow, Melisandre and Daenerys Targaryen. Recruit from the Seven Kingdoms and beyond to build your utmost roster and defend the Wall. Requires Android 5.0 or up, Size 1.1GB and iOS 9 or later, Size 1.4GB. you can find further detail and install click links Android Game of Thrones Beyond the Wall iOS ‎Game of Thrones Beyond… on the App Store I Love Hue Too

This app selected 9 Best Free Games for Android and iOS 2020. I love hue too is a new puzzle game from the makers of “I Love Hue” launched earlier game has a similar theme you need to solve puzzles which are based on colors, lights, and shapes you can enjoy playing create order, move each tile to its perfect place, recognize the smallest difference between similar colors, magic with fortune-telling system. Some features are color-based puzzle of perception, a mystical work of art, 900 plus levels to solve, multiplayer mode, etc. Requires Android 5.1 or up, Size 61MB and iOS 9 or later, Size 162MB. you can find further detail and install click links Android I Love Hue Too iOS ‎I Love Hue Too on the App Store This app selected 9 Best Free Games for Android and iOS 2020. After hearing the name you have a clear idea that this game is about delivery service you need to fill the delivery truck with delivery packages. There are two modes Single-mode and online multiplayer mode. Single mode is free and multiplayer is paid so once you can play single mode if you enjoy and like then try the other mode. It requires 3GB+ RAM and app size varies from devices you can find more detail by clicking the link. Totally Reliable Delivery Service 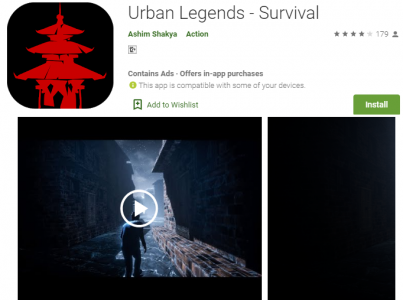 “Urban Legends Survival” is a horror and survival game developed by Ashim Shakya. It features a medieval era of Kathmandu valley where you need to encounter different urban legends through a glitch in the matrix. You must sustain, must be undetected and obtain certain objectives to get up and continue your present normal life simulation. Torch all the ashes located in main locations to find a portal that takes you back to your comforting reality. Touch an urban evil, and your soul quenches out of its body, your closed ones back home might never witness you waking up again. It requires Android 5.0 and up app size 68MB you can find more detail click link. Urban Legends – Survival Project RIP Mobile is a survival game, hordes of undead and demons have captured and take over the earth. The human was the only option to live in underground shelters to survive humanity gathered forces and established small specialized teams to destroy the threat. This action was called Project Rest in Piece, humanity developed highly advanced AI technology to manipulate specialized forces now called Agents. Realistic FPS Movement and Weapon Mechanics, 20 Weapons to choose, 8 Agents, to choose, with a leveling system, 5 levels, etc. It requires Android 8.0 and up app size varies you can find more detail click link Project RIP Mobile – Free Horror Survival Shooter Om Nom and Om Nelle a racing game, race through the dangerous streets avoid obstacles, use power ups to clear the way and open new characters it needs to complete various mission cover specific distances, collect letters, perform danger stunts and run as you can in multi run mode to get rewards, use boosters and power ups and also unlock other characters from cut the rope universe you can gain rewards to be on top of the leaderboard. Requires Android 4.4 or up, Size 63MB and iOS 9 or later, Size 175MB. you can find further detail and install click links Android Om Nom: Run iOS ‎Om Nom: Run on the App Store

If you love to do stunts now you can with RaceCraft, Drive like blaze on your powerful tracks in the world’s amazing cars you can put your crafting and racing skills to the test, you can build various of spectacular racetracks best for high speed action, Race either 1 player mode or if you want to challenge your friend select 2 player mode, and many more. Requires Android 4.4 or up, Size 328MB and iOS 10 or later, Size 503MB. you can find further detail and install click links Android  RaceCraft – Build & Race  iOS ‎RaceCraft – Build & Race on the App Store

Escape Machine City as the name suggests it is an escape game as storyline “It has been two days since the once vibrant Air City gone completely silent and now it seems to be flying on its own. All attempts to establish contact have failed. Your squadron was sent to investigate the silence, and now you need to solve the mystery”. Solve brilliant puzzles in the escape game, explore beautiful levels of game setting, stunning art and visual effects, play the 8 levels of game for free and much more. Requires Android 6.0 or up, Size 134MB and iOS 12 or later, Size 425MB. you can find further detail and install click below links Escape Machine City: Airborne‎Escape Machine City: Airborne on the App Store The storyline of the game is interesting “a person who recently got married and wishes to live a happy rest of his life. However, at the time viruses were spreading in the world and the majority of the people were infected and became zombies and unfortunately his wife was affected too so what should he do for saving her? Thousands of researches made and material used he believed that he can create a vaccine to bring his wife back to normal life. It requires Android 4.1 and up app, size 51MB you can find more detail click link. My Zombie Wife